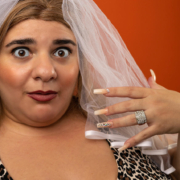 “Laughter is the best medicine.”

AN INTERVIEW WITH MARY BASMADJIAN

BTCF: What motivated you to become a comedian?

MARY: I always loved storytelling and making people laugh, finally decided to join the two together. I also felt I was in a unique situation where I wasn’t constricted by social standards like most Armenian girls would be.

BTCF: What is your process of developing characters for your comedy performances?

MARY: The characters come from experiences and people I’ve met throughout the years. Some characters are a mixture of people I grew up with.

BTCF: BTCF uses all forms of art and its healing elements committed to the prevention of body-focused and mental well-being stigma.  Does comedy have healing elements for you?  If so, what are they and how do you connect to them?

MARY: Comedy for sure is healing for me. When I write a joke about something that is going on in my life, I know I’ve processed it (usually). I journal and write jokes at the same time and its very therapeutic. To add to it when I tell a joke that has a lot of personal meaning for me and I get laughs or applause of agreement it validates my feelings even more and I love that!

BTCF: How does comedy help your mental health?

MARY: As I said, when I tell a personal joke and it gets laughs or applause of agreement it validates me and I feel like I’ve processed it. Also, the community of great people I’ve met doing comedy helps my mental health as well. I frequent an all-female mic on Monday nights at the Tao Comedy Studio and that helps me so much to process and write out jokes

BTCF: Your character Vartoush Tota is so likeable, colorful, and very funny! How did Vartoush come to life? What does she mean to you?

MARY: At first Vartoush Tota character represented all the WRONG adults around me. Meaning the adults that would say stupid things like I need to lose weight to find a husband and things like that. But as time went on, I developed her to be more progressive and to serve as the perfect vessel of truth telling and lesson teaching with comedic timing.

BTCF: You perform in many cities and venues; do you have a favorite and why?

MARY: I love Flappers comedy club in Burbank that’s where I produce my shows. The staff / everyone there is so nice. Tao Comedy Studio in LA is also such a great and supportive place to perform. I’m just grateful to be performing live comedy again wherever that may be.

BTCF: Do you come from a show biz family background?  What are your roots?

MARY: My paternal grandparents did some plays and sketches when I was a kid, my dad was part of it as well.

BTCF: Can you share a bit about your journey so far in your relationship with your body image?

MARY: For a very long time I’ve had a bad relationship with my body, but I’m starting to learn and unlearn certain things. I’m learning to appreciate this body and what it has done for me over the years.

BTCF: How did you originally hear about HAES, and what does it mean to you?

MARY: I heard it from Tammy from Keystone Treatment. Most of my life I was told I’m not healthy because I’m in a bigger body, but I’ve never displayed symptoms of any illnesses that would be connected to my size. I’ve learned that I am in fact healthy even at a bigger size.

BTCF: Has your culture shaped your relationship with your body and food? How?

MARY: YES. It’s very common in my culture to comment on bodies (weight gain / weight loss) without thinking about it twice. I’m Armenian and my ancestors survived genocide and famine, and I strongly believe that this has had a very big impact on our people as a whole. Growing up we are told to “eat it with bread so you can fill up” or “clean you plate so your future spouse is beautiful” I would assume my ancestors needed to eat like this to survive but that was passed down to us, forcing us to ignore body/ hunger cues and we are judged or pitied when we gain weight. Mixed signals to say the least

BTCF: Can you share a little bit about some of your other characters and how you came up with them?

MARY: I have a younger girl character and an older man character; I usually think about things I want to address in the community or talk about certain things and I ask myself who I want to see talk about this matter and I create that character.

BTCF: Do you like to cook? If so, what is your favorite dish to prepare?

MARY: Sometimes I love to cook and sometimes I don’t lol but my favorite things to cook are breakfast foods I LOVE eggs and cheese.

MARY: I’ve never taken character development classes, but I would suggest speaking from your own truth. It helps if the character is based on someone you know but it doesn’t have to be someone you know it can be anyone or anything that inspires you to share your truth the way it should be shared. Most importantly have fun doing it, if it not fun it’s not worth it. Don’t force anything.

BTCF: What would you share with youth today regarding using social media for positive and do you have any tips they can begin with?

MARY: Social media can be a double edged sword so it’s important to be mindful of what you’re posting and contributing to as a whole. I would suggest looking at some pages/ influencers that bring you joy and asking yourself what you can add to it that would make it your own. You can create something and NOT post, that’s ok too, that’s part of the social media journey.  Start small and build on it, and don’t pay too much attention to numbers i.e.; followers, likes, reposts things like that, yes I understand analytics are important in the social media world but that can take a toll on a person and your mental health is more important than social media validation. 🙂

You can connect with Mary here!

When it Comes to Exercise, More Isn’t Always Better
Scroll to top